This article was written on October 16, 2022 and updated December 15, 2022 to include more great information about Christmas toys.

We pride ourselves in making the best toy lists, and this is no exception. In our guide to the best toys for Christmas 2022, we’ll show you some of our favorite toys, games, action figures and RC cars — and show you where you can find the best deals.

Continue reading to see our [updated] list of the 25 hot toys for the holidays, followed by in-depth insights for each one.

Click any of the following links below to see more about each toy!

…and now for the full reviews! Keep reading about our favorite Christmas toys of 2021 below.

Starting from the top! Here are the in-depth insights for our top ten toys for Christmas 2021 that your kids cannot miss out on:

The incredibly detailed 7” scale Batman action figure should be atop any holiday toy list! From McFarlane Toys, this Multiverse Batman action figure is designed with Ultra Articulation, this Batman action figure arrives complete with 22 moving parts for full range of posing and play. Batman is based on his look in the Batman: Three Jokers Comics and comes fully-equipped with a grapple Launcher and base. Collectible art card & figure photography included.

Based on his look in the Batman: Three Jokers comics, and designed by Todd McFarlane, this DC Multiverse Batman 7-Inch Scale Action Figure features ultra articulation with up to 22 moving parts for a full range of posing and play. Batman comes with a Grapple Launcher and a base. Also included in a collectable art card with figure photography on the front, and character biography on the back.

One of the most popular Christmas toys this year, this deluxe Roblox set features Badimo, stars of the fan-favorite Roblox game Jailbreak. Complete with their shiny Celestial deluxe vehicle.

With a projected release date of March 2022, the Tamashii Nations Mandalorian & Grogu set may not make it in time for the holidays.

But it’s still one of the best toys we’ve had the chance to see this season. Standing at just over 7” tall, the Mandalorian action figure design takes cues from the Beskar armor seen in the Star Wars series. It also includes an in-scale figure of Grogu/Baby Yoda, who can be standing on its own or seated in a pram inspired by the wooden pushcarts from Japan’s Samurai era.

For a unique Christmas gift, Tamashii Nations’ Mandalorian includes a completely new sculpt suit and armor, inspired by the beskar armor from the Disney+ Series! The Mandalorian in-scale action figure also includes Grogu, who can be sit in a pram inspired by wooden pushcarts from the Samurai era of Japanese history. The Mandalorian action figure set includes: two pairs of optional hands, one rifle, jet pack, blaster, sword & scabbard, Grogu, and pram.

Obsessed with uncovering the secret of super-speed, a scientist from the 25th century named Professor Eobard Thawne traveled back in time to meet his idol, The Flash. However, when he learned that he was destined to become a villain and die at the hands of the Scarlet Speedster, Thawne went insane and became the Reverse-Flash. The Reverse-Flash harnesses the power of the Negative Speed Force, which grants him many of the same superpowers as The Flash, but also allows him to travel through time. He often uses this ability to travel through time to continuously wreak havoc on the timestream and torment The Flash.

More DC favorites to top your Xmas list! Incredibly detailed 7” action figure based off the DC Multiverse’s Reverse Flash. Designed with Ultra Articulation with up to 22 moving parts, the Flash comes with 6 speed force lighting pieces and a base, along with a collectable art card and character photography.

Build your own Sonic the Hedgehog world from scratch or add on to your Green Hill Zone or Studiopolis Zone Playsets (each sold separately). Suggested for ages 3 & up (Contains small parts.)

Didn’t expect to see WWE’s John Cena on a popular Christmas toys list? Think again. The WWE fan in your family can recreate all the action in the ring with the authentic ‘Superstar Scale’ John Cena action figure. The detailed Cena replica features 10-points of articulation to play out signature moves and poses, and is detailed with TrueFX technology for life-like faces and authentic ring gear.

Fans, collectors, and kids alike can enjoy Spider-Man this holiday season with the classic, 6” action figured inspired by the Marvel comic. A dark, metallic take on the fan-favorite, this Spider-Armor Mk I figure features the character’s mainstay accessories, including alternate hands and web FX accessories! And, look for other Hasbro Marvel Legends Series figures with Marvel Entertainment-inspired characters.

A tribute to the history of Marvel Super Heroes, the Marvel Retro 6-inch Spider-Man is one of our favorited recently-revived Marvel heroes, complete with retro packaging and design. Each figure in this line includes multiple points of articulation, classic-inspired details, and character-specific accessories. Collectors and kids alike can add Spider-Man to their Marvel collection this holiday season with 6-inch scale figures from the Marvel Retro Collection!

Recommended for boys or girls ages 8-11, this remote control car by AMENON belong under every Christmas tree this year!

Recommended for boys or girls ages 8-11, this remote control car by AMENON belong under every Christmas tree this year!

If your kids or grandkids have been really, really good this year, then it might be time get surprise them with the new 2021 Nintendo Switch from Amazon. This version includes a 6.2″ multi-touch capacitive touch screen and a detachable gray Joy-Con that can be removed from either side of Nintendo Switch for more play styles.

With almost 4,000 available games, the Nintendo Switch provides hours and hours of holiday fun! Some of the most popular Switch-exclusive titles of the last couple years include Mario Kart 8 Deluxe, Super Smash Bros. Ultimate, and Pokemon Sword and Shield.

And, right now, if you order via Amazon.com, you can pay just $50.00/month for 6 months (plus S&H, tax) with 0% interest equal monthly payments when get an Amazon Prime Store Card.

And below, we’ve included some additional gift ideas — not quite top ten, but nonetheless still must-have Christmas toys for 2021 to give your kids a holiday to remember!

Fresh off the success of the Suicide Squad (watch today), this incredibly detailed 7” Bloodsport action figure joins our popular holiday toy list. Like the other DC Multiverse action figures, Bloodsport has up to 22 moving parts for full range of play and display, and includes: two swords, a base, and 1 of 4 pieces that — when combined — will assemble King Shark!

Bloodsport is a world-class marksman specializing in brutality—his hands, and anything he wields with them, are deadly weapons. Trained by his mercenary father from the moment he was born, this hardened criminal has but one soft spot…which, of course, Amanda Waller uses to persuade (i.e. blackmail) him to join the Squad. 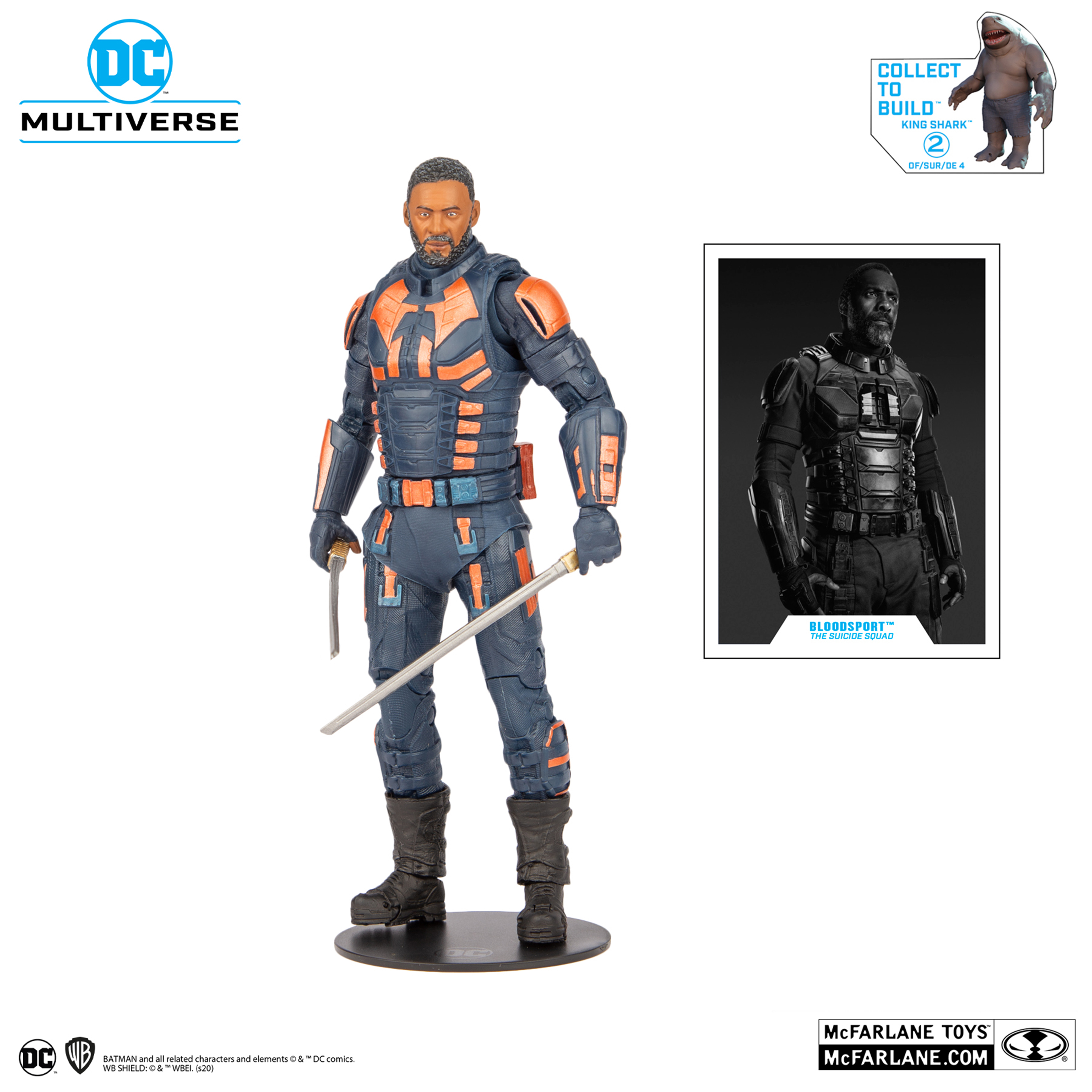 Bluto is ready for fist pounding action! This gigantic Popeye figure comes with a removable hat and alternate hands for all your play (and display) needs. 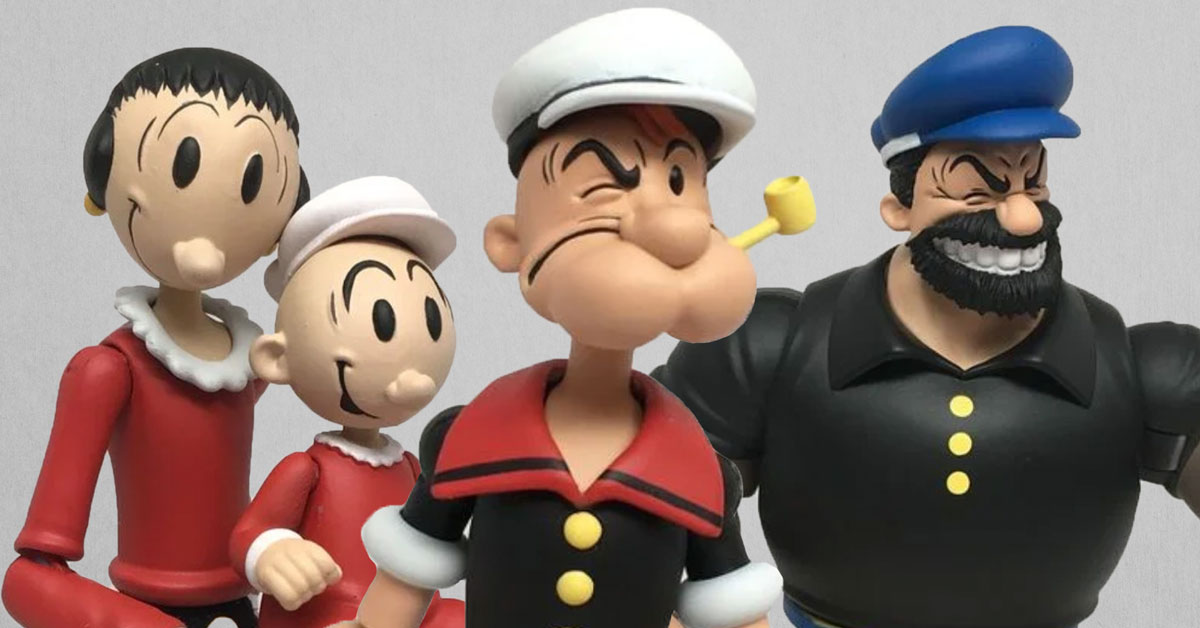 Easily one of our favorite kids’ holiday toys, Bluto is ready for fist pounding action! Everyone’s favorite sailor and his crew are finally coming to highly articulated figure form via Boss Fight Studio. Inspired by the classic Segar comic strips. The 6” Bluto action figure comes with a removable hat and alternate hands.

Grogu (The Child), affectionately referred to by fans as “Baby Yoda,” is hungry for Force snackin’ fun! With Force activation, the Galactic Snackin’ Grogu toy will perform a 2-handed Force move, inspired by scenes from season 2 of the live-action series The Mandalorian on Disney Plus (try it free!).

This remote control Batmobile from DC Comics is one of our must-have toys for Christmas this year. Featuring a dual-joystick controller with 2.4GHz frequency, this Batman remote control car is easy to drive for ages 3 & up. The Batmobile requires two AAA batteries for the controller and three AAA batteries (not included) to operate the vehicle. This gift set includes: 1 Batmobile RC, 1 Controller, and 1 Instruction Guide.

This holiday seasons, your comic-book lovers can race into action with the DC Comics’ Batman Batmobile remote control car! This 1:20 scale remote control Batmobile vehicle pits you against the bad guys of Gotham City! Drive forward or reverse, and steer left and right with the easy-to-use dual-joystick remote, perfect for beginners. With 2.4GHz frequency, you can race up to six vehicles at once and control your Batmobile from up to 250 feet away. Featuring authentic styling and wheels with Dark Knight rims, this RC car revives the iconic vehicle to life.

For more great ideas for your holiday toy list, check out our ranked list of the Best Action Figures of All Time.

Aerodynamic speed in an eye-catching yellow paint job, this fully-functional RC car uses a 27MHz controller to perform forward, reverse, left and right turns. The simple dual-joystick remote control lets you rev the engine up to a full 5 mph. Talk about need for speed!

20. Spidey and His Amazing Friends Figurines

Below we’ve compiled some additional resources for finding the right 2021 Christmas toys for your kids.

Where to Buy Awesome Toys for Christmas

Below are some of the top online retailers for finding kids’ holiday toys:

What are the Hottest Christmas Toys this Year?

Who better to answer this than the true experts? Both Target and Walmart have released their official lists of the holiday season’s most sought-after toys and action figures. Both of those lists are very comprehensive guides to some of the most popular 2021 Christmas toys.

Will toy shortage be an issue this Christmas?

Not, likely no. In spite of the ongoing global pandemic and unforeseen obstacles to importing, many experts agree that the toy supply chain should be largely untouched.

While there’s a toy frenzy every year (think Beanie Babies or Tickle Me Elmo), there’s no reason to panic. Nor is there expected to be an surge in toy pricing; in fact, the Consumer Price Index shows toys to be more affordable in the past two years than ever before [Source].

How to avoid a Christmas toy shortage

The early bird gets the worm! There is no time like the present to start your Christmas shopping. Right now, most major retailers are typically going to have more inventory on their shelves than in a month.

Plus, with the massive variety of online retailers to choose from, like Amazon or Walmart, you can still take advantage of 1- and 2-day shipping, to ensure your presents are here next week.

Where to Donate Christmas Toys?

Christmas is truly the season of giving. And this Christmas you can give back & spread the love to people in need. Below are some resources for where to donate Christmas toys:

What to Watch this Christmas

See our guide to the Free Disney Plus trial and see what movies are available to you this holiday season. Upcoming hits include: “Shang-Chi And The Legend Of The Ten Rings,” “Jungle Cruise,” “Encanto” and many more!

Guess what? When you purchase a toy or action figure using on one of our links, The Brick Stan may earn an affiliate commission. That’s how we earn the funds to continue producing these amazing toy guides.